I had a slightly stone-age Saturday, and after bashing the flint and making nowt but a mess, i thought i would have a crack at getting some sinew ready for future hafting needs...
So i have this Muntjack sinew, dried, hanging around for well over a year and for some reason i decided that despite remembering nothing of my previous reading on the subject, i would neglect to revise stuff on the net first.

Therefore i took a length of the stuff that had been soaking for a few days and was utterly floppy again, and i beat it with a stone untill my arms hurt and my hands cramped.  Then i beat it some more untill i had a mashed flat chickeny smelling thing that seemed useless and no way to pull strands off of it.  After it dried overnight i found that i had made uber-flat cave-jerky but nothing any good for binding.

As that didnt work, i tried beating the dry stuff - with rock, antler and lump-hammer and started to get somewhere as it's all crushed and frayed but i still cant pull strands off it, although i can see them in the structure now as well as at the frayed end.  If i pull them really hard they just end up breaking.

So what's next?  soak and then pull the strands out?  i'll be honest that i'd rather not chew the stuff (that much) if possible.

And yes, i do know that i could get the artificial stuff

Maybe it's in the choice of bone. Ray Mears makes it look easy in this vid.

Ta, i reckon i was right all along that this Muntjack is not really worth the bother - it's only about 10 cm long at the most, i may just have to buy a backstrap off t'net to play around with, and maybe the artificial stuff for stock too.

Cool vid too, i really must try and make an adze

Well, it's trial and error for most of us, sadly. Well done for persevering!
The Aborigionies for binding used kangaroo tail sinue, I'm guessing that shiz is long! Yet to use the real stuff but the artifical sinue is excellent, comes on a spool and is really sticky to start with. It's just waxed nylon threads, the stuff I have at the mo was sold as "natural" colour, looks bright yellow to me.
The spool I have is 10 Meters and has lasted a while so far, for loads of little jobs. I got it back in March.

thanks for the link - interesting use of the bluebell bulb - I wander what it tasted like.

After a bit more trying, i finally got a result of sorts.... i had some slightly stringy bits that i had managed to separate soaking for a couple of days (much more than needed) and managed to split off a few lumpy ill defined bunches of strands while breaking a lot more.
These were short, maybe 8-10cm and i wrapped 3 or 4 around a pressure flaker handle as a test - too short and slimy to bother splicing them and not worth adding a loop to pull the finishing end under the whipping, all i did was wrap them around one after the other.  Then i dried off some of the excess moisture over the hob.
Three hours later it was set lovely and hard... i eventually managed to pull it off the handle to test it's strength (it was not sitting in a notch/hollow) and was unable to pull it apart testing it as a chain-link, though i could pick the various strands apart with my nail.
Clearly it's very strong stuff and would withstand perpendicular pressure very well, but i need more practice, and not with blooming Muntjack methinks.

Not one to be put of by failure, i've had another little play with my sinew...

This time i "combed" from the tip with a bone awl to start separating the fibres and it's kinda working.  I've only had a few mins to do this and it seems best to proceed gently other wise you pull too much material out.

Imagine you are combing out someone's dreadlocks and they are holding a hammer to hit you with when it starts to hurt too much.

I may eventually succeed, who knows! 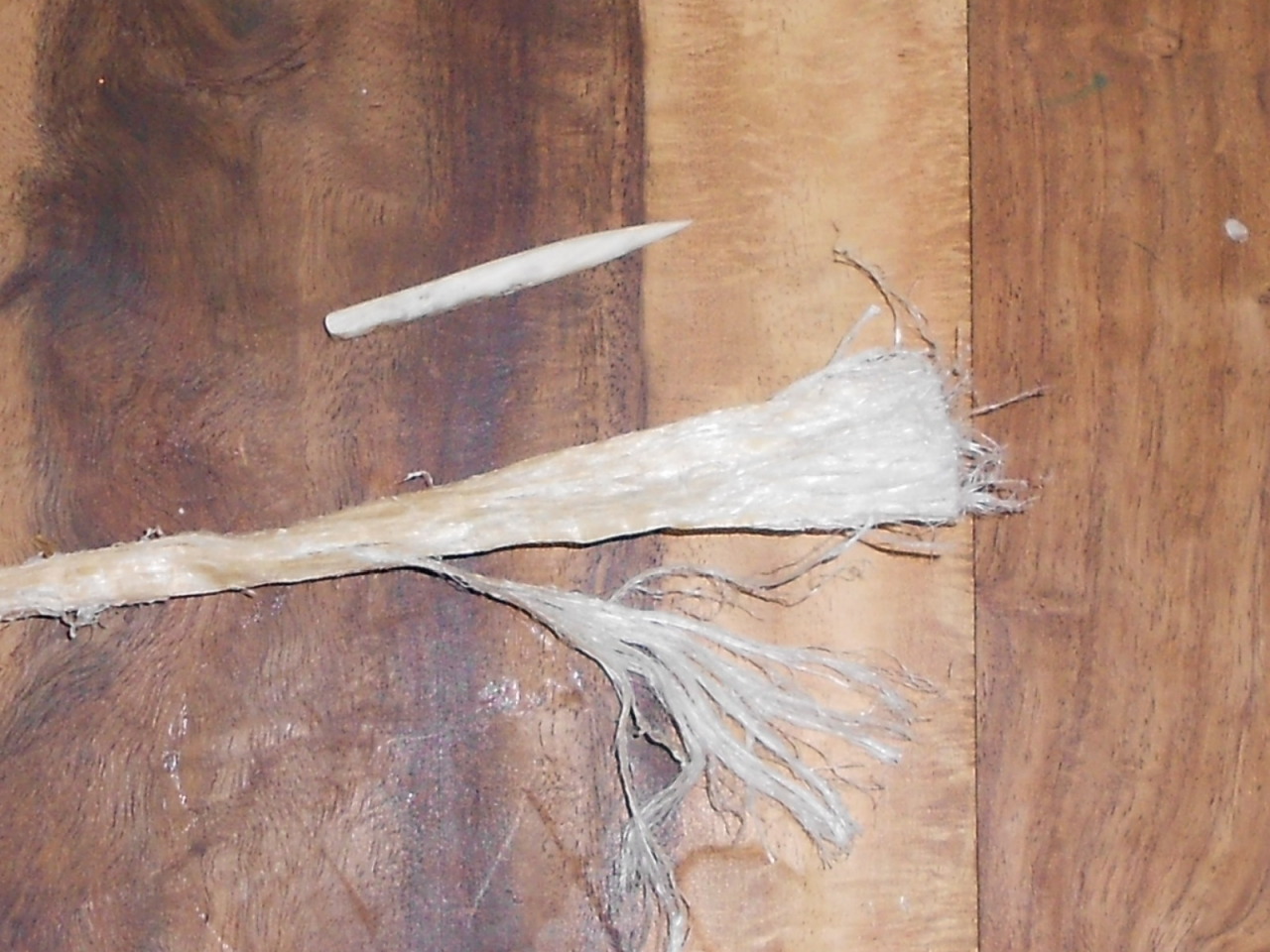 Mwahahaha!  It seems that victory is mine, and i have finally processed my sinew!

So i'll describe the process in full, it's simple once you work it out and hopefully others can avoid the trial and error that i was subjected to.

In this pic, on the left we have the raw dried sinew prior to any fiddling about from yours truely.

On the right is what i assume is the waste leftovers.

Obviously there is a large rock and antler hammer too - these were my tools, besides a bone awl - but any pointy thing without a bladed edge would presumably be just as good. And a close up of the raw, untouched sinew - from a muntjack deer, it was donated to me as is, and highland horn sell ones that look similar though they may be longer.  Yes, i said it was about 10 cm long, which it clearly is not... i'll put it down to a brain fart and move on swiftly 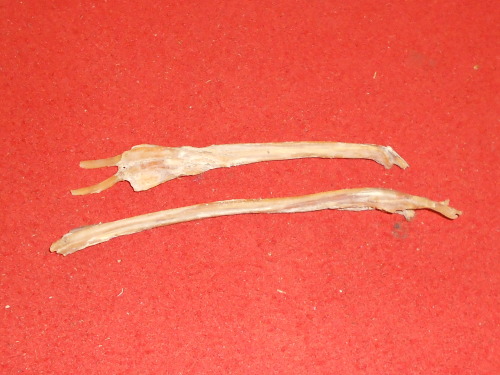 So place the sinew on a hard surface - i used my back door step and alternatively a paving slab.

Then hit it repeatedly with your rock/baton etc.  Fairly hard, starting at the end.

You will notice it start to whiten in colour, and the semi-opaque nature change as you start to see it's string like structure appear.

It takes a fair bit of beating, believe me!  I think it's best not to assault it with a lump hammer and all your strength or you will make jerky like stuff.  Turning it over and beating from various sides seems to do the trick and result in a consistent change in it's texture etc.

You will notice it start to separate more and more untill an outer layer, of sheath or tendon or whatever can be pulled off that looks like this: 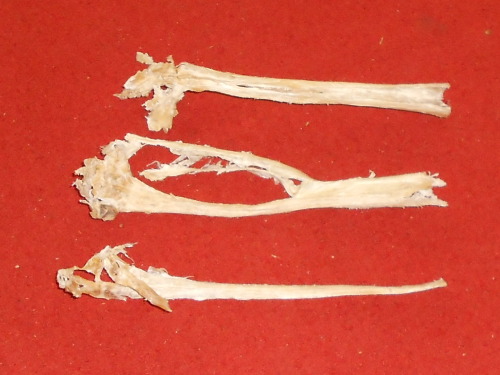 This looks a bit different from the inner material, and i am assuming it is waste, though i have kept hold of it just in case... if i hear no advice on this i will have a go at processing this too at some point.

Keep beating the left over inner untill it starts to fray at the ends, then with the awl, start to comb through, starting gently at the end so as not to rip the fibres.  You will need to push the point of the awl through the side fairly strongly at first, and then pull up to the ends.  Once you have a go it will become obvious. 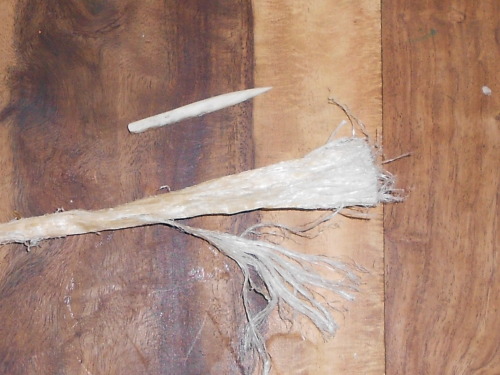 Continue to "comb" and separate the fibres in this manner, gradually moving further and further down.  Do it too hastily and it seems you will pull material out and break fibres.

Continue untill you have what resembles a paleolithic duster 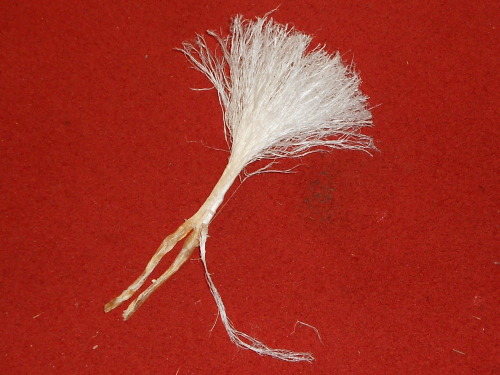 you can roll the fibres between your hands to further loosen them after beating and before combing, as if you were spinning a hand-drill spindle.

Then take a small bundle and pull down to separate them from mum and then begin your chewing/soaking and hafting or whatever etc.

I'm relieved - i was beginning to think i was wasting my time, but it paid off in the end!