I've mentioned this in other threads and thought it would be worth having it's own topic, and as luck would have it i decided to make some new Hazel spindles for fire making, and had no straight stuff.

So, under my bed, i had an old hazel fire bow and decided to recycle it, giving me a chance to a before and after type thang.... here is the stick, and the heat source 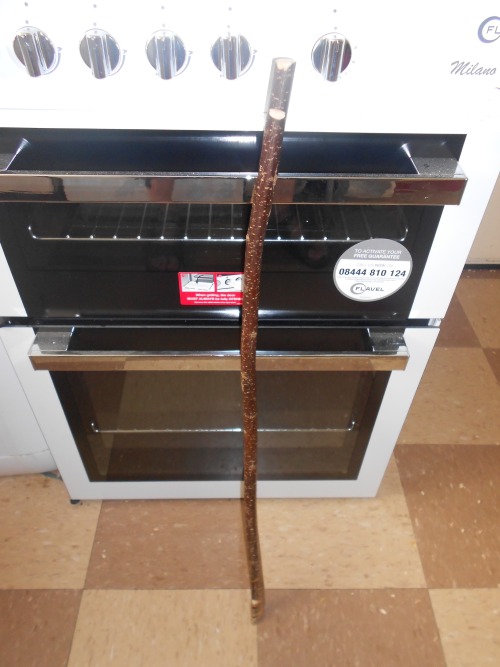 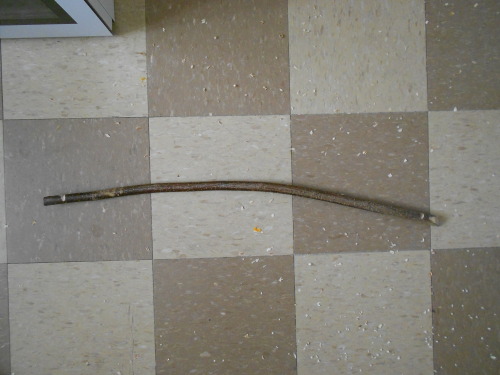 It's hazel, and is at least 6-7 years old, and as thick as my thumb 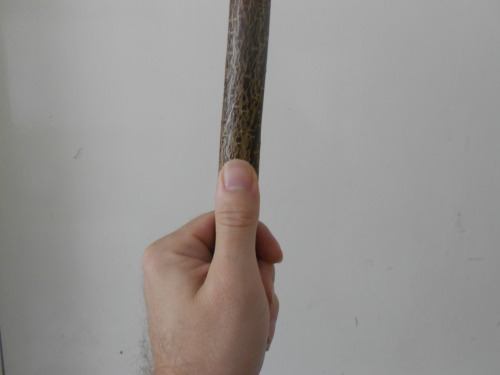 It was actually given to me by an old colleague who was a bodger/hedger and told me of this method, then gave me some of his kinkiest seasoned sticks to try it out on when i implied i was dubious as to it working.

They were bendy in 3 dimensions, rather than just bowed a bit.  So i straightened them (about 4 years ago) with this method, then rebent a section of one with more dry heat to make the bow shape when i needed a new bow about 2-3 yrs ago.  So they have had some punishment and could never be called green! It's about 3 feet long, for ref.

I use the smallest gas ring on my hob, at less than half power.

I select a bend in the stick (usually starting near one end of the stick) and start to apply heat, probs holding the stick 4-8" above the flame.

I move the stick, both left and right to spread the heat, and i rotate it too.  The inside curve is the bit that will stretch and this needs more heat than the outside.

The colour of the bark can be a good indicator as to weather you are heating too fast or not - look for signs of charring, which is to be avoided.

When the heated area is too hot to touch, you are ready to bend it.  You will use your knee as a fulcrum - protect it with a pad/towel (the hot bit goes across your knee) etc and slowly flex the stick to stretch the fibres.  Flex a little then relax it again, repeat a couple of times - if you go too far and too fast you could damage the wood.

Reheat the stick a little if it's cooled down and become comfy to touch it, then start to bend the same area again - it should feel like it bends more easily now so bend it past where you want the curve to set at, gently and slowly, and hold for a min.  Then repeat the process with the stick rotated a little, say 1/8th of a turn each side of the initial position, then bend again at the starting position.

Then leave the stick to cool.  Sometimes one curve can take a couple of efforts to get right.  Once it has cooled a little, move to a curve nearer the middle of the stick and repeat there - by starting near the end you can move down to other curves and work more quickly just by being methodical.  You can also quench the stick to speed cooling, it works fine for me.

Remeber though, that heat sets the shape, and can also un-set it too - when doing complex curves on long sticks each curve will unset a little due to working on other areas and the heat from that.  This is not a problem as it's only partial and you can iron it out as you go - it should make sense once you practice a little.

So that stick i pictured - this had had two applications of heat and gentle bending, making a little difference: 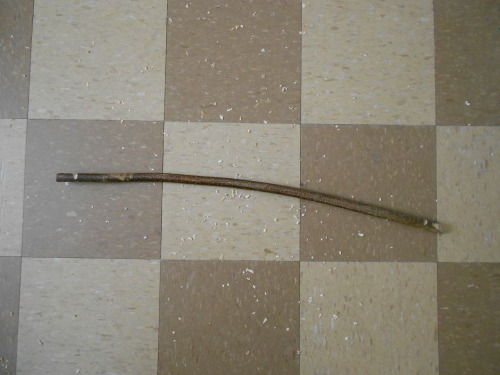 but it's still snaking all over the place: 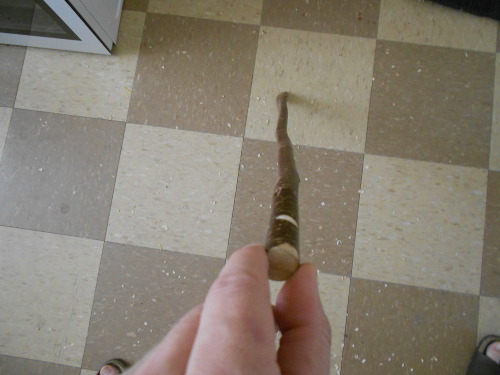 so about 5 more areas heated and bent and it's much closer: 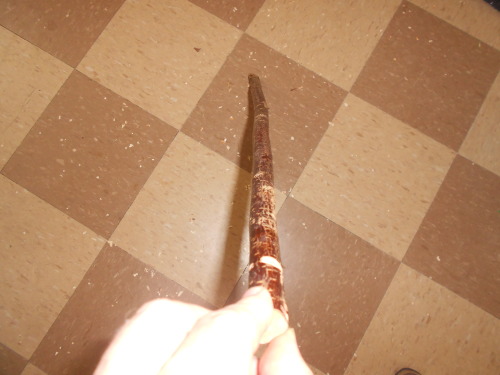 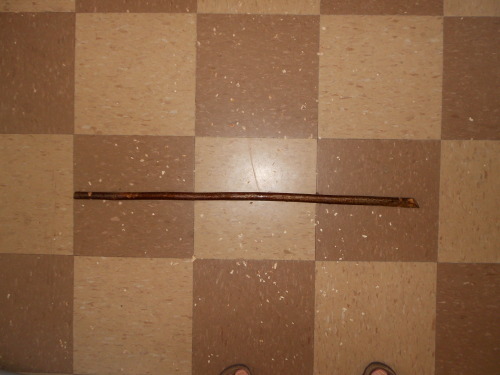 Plenty straight enough to cut into spindles, so i shall not go further but i hope it's obvious that it could go near-stock straight if i carried on.

Please note - this can damage the bark if you do not take care - this is an old and seasoned stick, that had been straightened, bent and re-straightened without care for it's appearance (ie: i could have taken more time to apply heat more slowly).

The thin hazel bark has finally suffered and who can blame it: 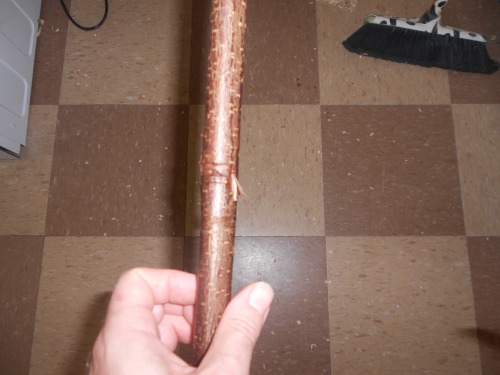 Little cracks in the bark developed across the lenticles, which i have pulled up and peeled back to confirm that the wood is undamaged. 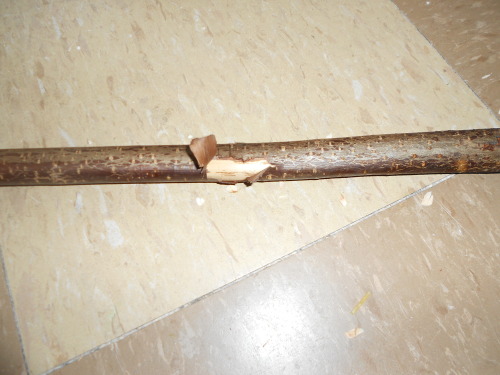 Despite the punishment the stick has had over the years, with more care this would be either totally avoidable, or so small that it's unnoticed or easily covered by a simple repair and finish.

A couple of different examples, first the longer thin Hawthorn stick from my "Walking Stick thread" in the group pic: 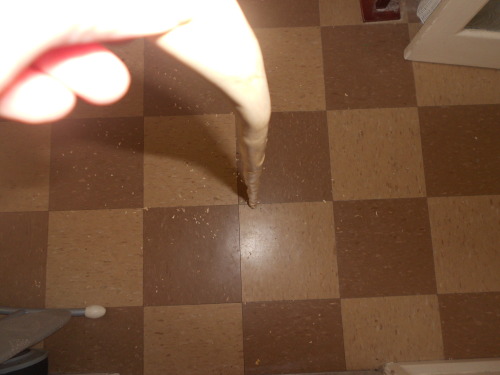 Obvs Hawthorn is reknowned for it's twisty, bendy nature... even when you find the best examples they are NEVER straight.

And a Hazel shaft that about 5' tall, not coppiced, just cut from a tree and it was purdy kinky too: 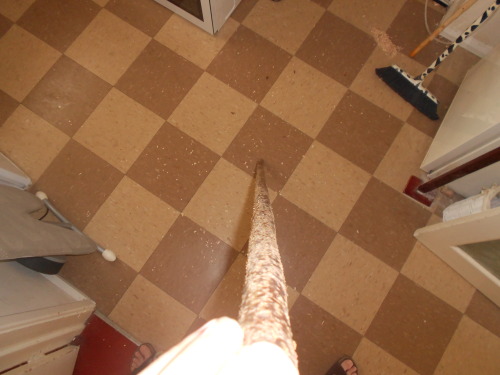 I've never tried steam bending so i cant compare the two, but this requires zero kit.... it is also easily controlled and applies heat where you want it.  I have yet to damage a stick doing this

And here is a vid i just found, for a long-net pole, and he's using newer wood but less care with the flame.  He illustrates the process quite well.

Still to finish the bow and this is all damned good advice! Thanks, tommorrow I'm cooking wood for tea, Mrs. Hertzian cone may object though

i saw a great tip in a primitve bow vid ages ago where a guy was getting a kink out of one end and did not have enough room at that end to grip it with his hand after heating it over a campfire - he just used a small gap between two parrallel upright branches in a tree.  Put the end to grip inbetween them , brace the tip against one, and pull against the other where the bend is.  I tried it out and it's genius - i've seen modern stick makers make jigs that have a similar profile by attaching two short offcuts of scaffold poles fixed side by side on a bench with a gap of maybe 3 inches between them (they are padded to prevent dents to the wood).

I just found a great , cheap piece of kit that could also be easily replicated..