Thought I'd have a go at making one of the possible lamps the Neolithic Flint Miners may have used and test it. I got a large chalk pebble, soaked it till it was soft, then let it dry a bit till it was strong enough to survive me boring a hole in it. While it was drying I cooked some bacon, ate it, then rendered the bacon fat. After the fat cooled I filled the hole in the chalk with it and added a vegetable fibre wick. 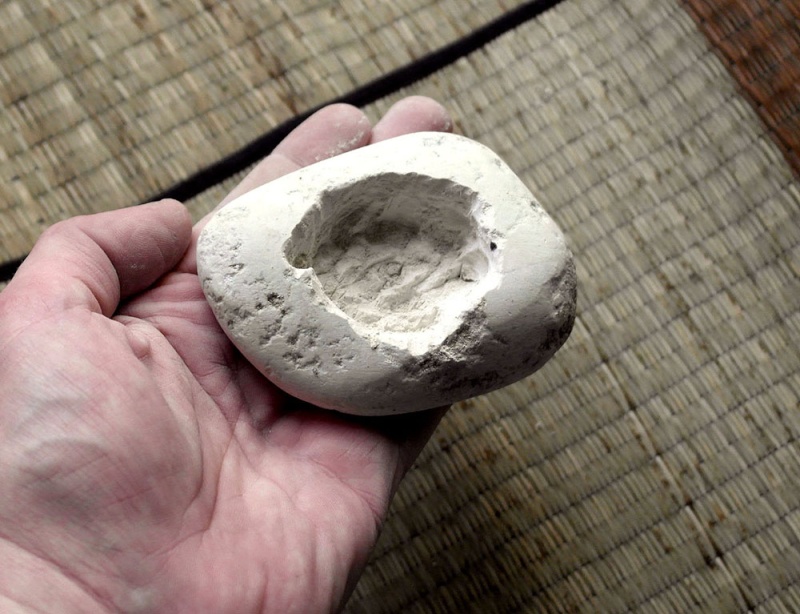 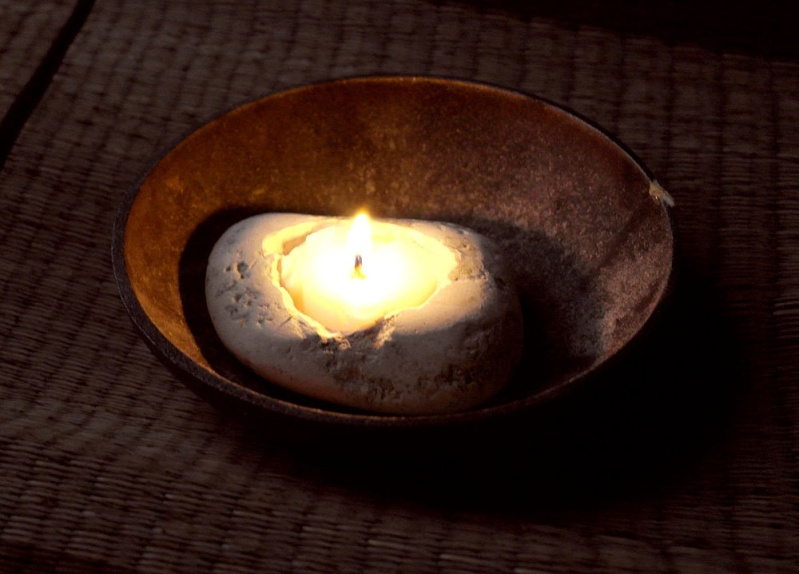 I placed the lamp inside an iron bowl I use for my fire based experiments. The lamp burnt well and gave a good deal of light, the burn time being about three hours before the fat was used up. The chalk absorbed the heat well and didn't get hot at all, but at the end a light film of the fat covered the bottom of the bowl, not sure if this was from condensation or something else. Lucky I used the bowl, it would have ruined anything else.

Update, on a second burning I used a much thicker wick and got a very strong flame. This one lasted only two hours and turned the fat to liquid, resulting in a small amount of the fat (1.5 cm round patch) seeping through the bottom of the pebble. No heat got through the stone though, the outside cool the whole time, even underneath and the condensation layer of fat less, a mat to stand it on should be fine to protect any surface from seepage and condensation in future.
- - - - - -
I am fond of pigs. Dogs look up to us. cats look down on us but pigs treat us as equals.

Overnight the fat has penetrated into the porous chalk and oily bit are all around. for the third burning I used a very think wick, it shed an awful lot of light and it burnt for about an hour. So roughly 2mm wick 3 hours, 4mm wick 2 hours,mm 1 hour.
- - - - - -
I am fond of pigs. Dogs look up to us. cats look down on us but pigs treat us as equals.

never thought of making a lamp, did they use similar lamps at grimes graves? - i once found the remains of a roman lamp.

That's what I trying to find out. There were these chalk pots found that look like lamps. An investigation found animal fat in them so they were thought to be lamps. A later study found no animal fat and noticed they only had an hour or so burn time so suggested they weren't.
- - - - - -
I am fond of pigs. Dogs look up to us. cats look down on us but pigs treat us as equals. 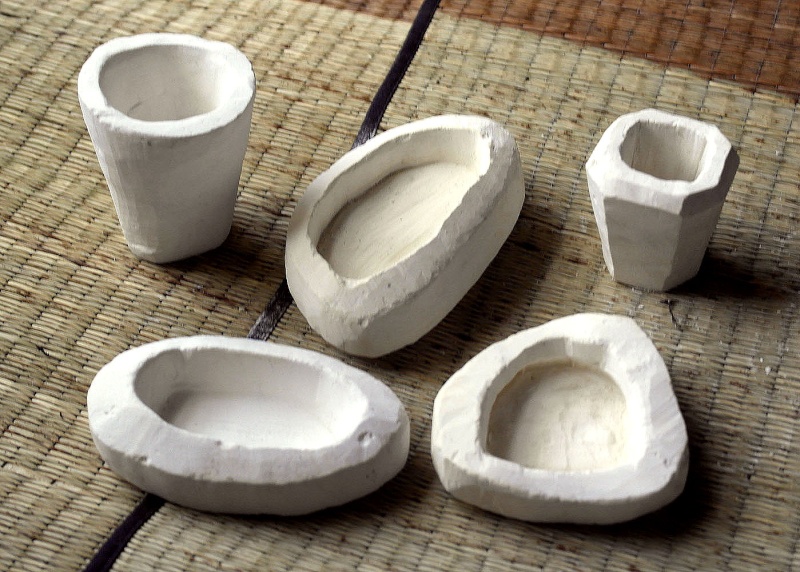 well, the experiment is over, can't say I have learn't much. While all sizes of chalk (lamps?) work well as lamps,  the smaller ones don't seem to be of much use for mining though as they hold little fuel, the larger sizes would be fine though. 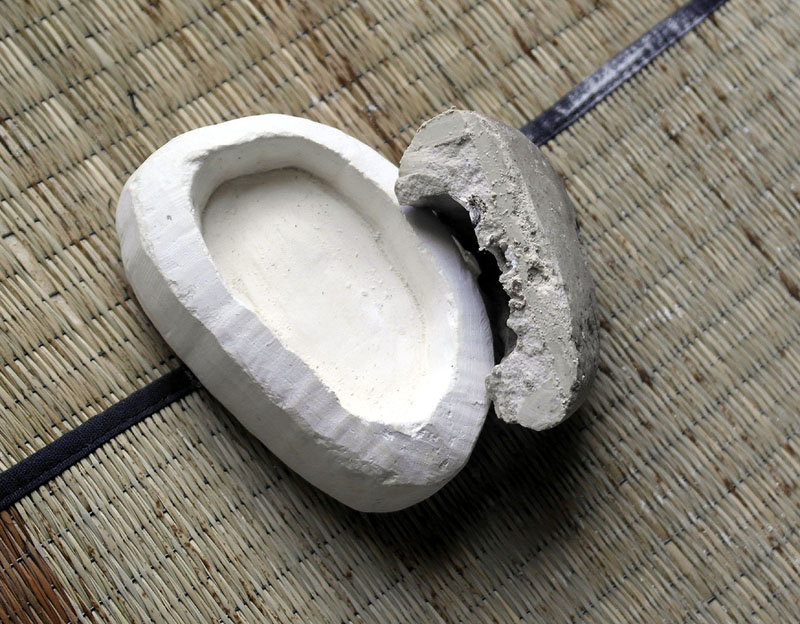 After several uses the tallow soaks right through the chalk and even leaves patches where the lamp is standing, not much good for domestic use but fine for something sitting on a rock down a mine. The tallow soaking though the chalk also turns it a mouldy grey, all the prehistoric (lamps?) found are white, but if you wash the tallow out the chalk it reverts to a pure white, so if the tallow did not survive the millennia the discolouration would not survives either.

Side wick burn mark however survive on lamps from the palaeolithic so would most likely survive from the neolithic, but none are present on neolithic (lamps?) however I found it very easy to create a central wick which left no burn marks on my lamps.

The experiment doesn't seem to have shed much light

on the issue however at least as aresult I have become a quite skilled chalk carver. Maybe I'll start selling a line of chalk ashtrays on ebay. 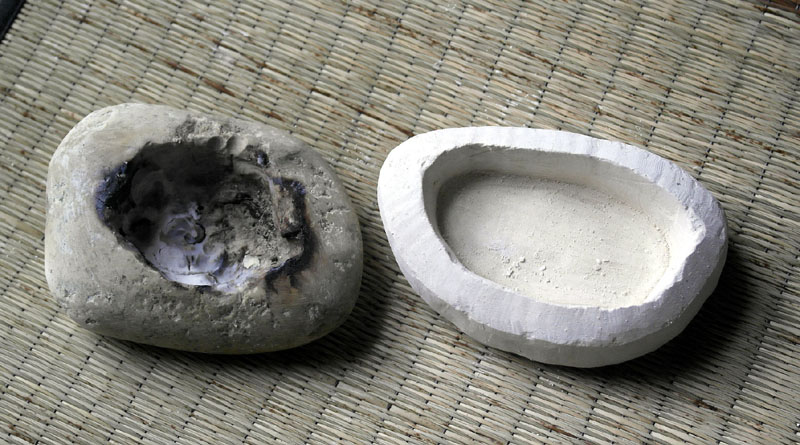