A bit of advice if I may ask. What would be the best way to put a hole through stone or flint? Can it be done without risk of damage?

I've seen holes in Mayan artifacts, but the archaeological reports always seem to say they were natural holes exploited by the knapper for artistic effect, however we should perhaps not take what archaeologists say as gospel as archaeologists often have limited knowledge of knapping.

One modern way would, I guess, be a slow drill, the same as you saw knappable material with a slow saw. In prehistoric times they used hand saws, which were by definition were slow, so work like a modern slow saw, I would hazard a guess, as they had hand drills and applied them to ground axes, they could apply them to flint stuff. Though I guess prehistoric hand drilling flint would be a very slow process. You've got me intrigued, I'll look into it.
- - - - - -
I am fond of pigs. Dogs look up to us. cats look down on us but pigs treat us as equals.

I did a google and found a reply to this question. It was suggested that a diamond tipped drill attached to a dremel may do it.

Don't know how effective that would really be, as flint, as we all know is notoriously fragile. 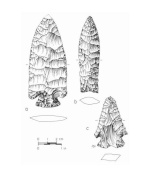 Many thanks - I'll give it a try on a piece that won't be used for knapping and see what happens.

Diamond tipped drill buts are the way to go, be very carefull not to twist ether drill or flint or it will break. My girlfriend has a obsidion arrowhead which has been drilled, it's one of those made by the thousand in Mexico for tourists.

not that i have tried this, but i have read many times that a flint tipped burin/drill could do it (hand/bow/pump drill operated), or indeed a garden style cane, and that once you make an impression in the piece, lubricate with a little water and let the dust stay there as this helps to make an abrasive slurry. i believe that with the cane you should fill the end of the hollow with flint dust/flakes to improve abrasion.

it must take an age tho

i have seen folk using shop purchased plate-glass cutting kit on stone with some success, may be worth looking in to

Thanks for all the info - I think I'm going the Dremel route at the moment.

A normal electric drill will work fine too, have a test run on some waste flakes first.

In case anyone is interested, I have posted a piece of replicative work here http://pierrefigures.prophpbb.com/topic13.html drilling flint with flint... 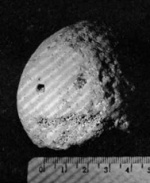 Does this technique work on the flint or just the cortex?
- - - - - -
I am fond of pigs. Dogs look up to us. cats look down on us but pigs treat us as equals.