I came across this pic in a hyper minimal post elsewhere earlier today: 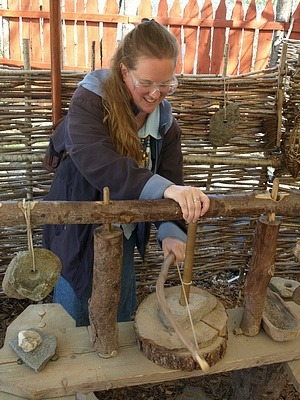 and did a bit of digging - it comes from the Loch Tay Crannog reconstruction, but sadly is not from any evidence that they found there and was put there speculatively by the Archys/Crafters there.

Quoted from the above page:  "Several perforated, roughly circular or angular thin stones have been discovered on many crannogs. Some may have served as net or fishing weights, weights for drop-spinning wool, or other purposes including jewellery. Close examination of the stones revealed that some of the holes had been drilled, while others had been chipped. No drilling machine has been discovered so far, but our bow-powered example or something similar could have been used for this purpose. Will you be the one to get through the stone?"

However, i've been unable to find out the inspiration for this - but thats not the point..... what an awesome rig!  Having taught bow drill to young folk with various "issues" i think that this is just brilliant - it totally removes the co-ordination issues, potentially awkward stance and a lot of the strength/endurance requirements often needed for bow drill, beit for firelighting or crafting... kids could even do it in a team.  It may not fit in the backpack, but now anyone can do bow-drill without firing a spindle into an innocent bystander's eye

Look excellent I saw this on youtube a while back, it's for drilling hole but I thought it could easily be adapted for fire making. It has some coordination issues but at least it's portable.

very interesting - I found this one - I have shown you before I think - it has signs of chipping to make the hole but is smooth inside as if drilled maybe by hand as its irregular. 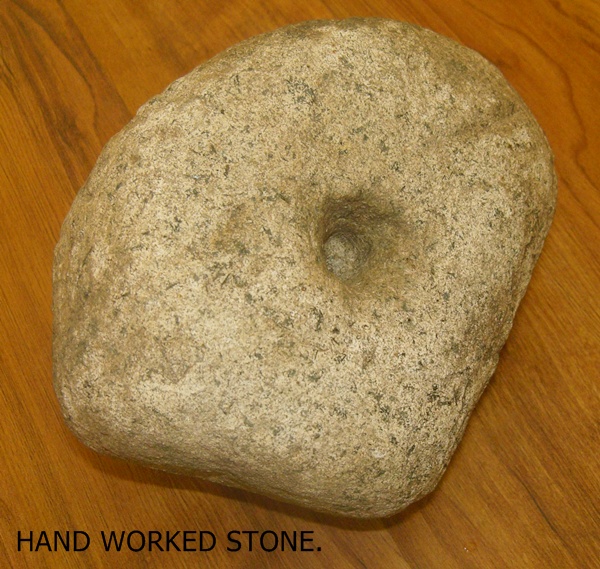 It's a pump drill - i think they originated in Egypt and they are blooming ingenious, i've seen plenty of pics of them but never a vid of one in action.  They are certainly used for crafting at least, but i dont know if you would get enough downwards pressure for making an ember.

I wonder what the purpose of the drilled stone you found is Mr B?  Looks too big to be a bearing block for a bow drill, how tough is it and how deep does the hole go? maybe someone was making a net-weight and found the rock was too hard and discarded it in favour of a softer one?

I've often started working on a particular material, and a couple of hours of sweat and no progress later i've thought "bugger this" and tried on something else.

the stone is granite, and the hole is about 1.5 inches deep the stone been about 6 inches x 4 inches thick - I thought it was for fire making but it is a bit big, I did wonder if it was used for preparing food maybe,

it has been well used as I can see hundreds of chips when I shine a light across it around the hole.

Wow, that is a bit of a beast.  i would expect that if food was prepped in it then there would be a noticable trace of it, like a sheen at the very least.

Granite is bloody hard stuff ofc,  if they were trying to drill through it to make a weight it would have been really tough going, so my best guess is that someone was labouring at making a weight and some bright spark leaned over to them and said "use this limestone/sandstone (etc) dude, you'll be done in no time"...

Is it deffo chips that you see inside, or is it something like light reflecting of the mica?

http://www.archive.org/stream/stoneimplementsw00evaniala
- - - - - -
I am fond of pigs. Dogs look up to us. cats look down on us but pigs treat us as equals.

splendid find, i look forwards to reading it when i get the time!

pg 213 similar stones to the one I found, the size would make you think hammer stone.

skalla wrote:They are certainly used for crafting at least, but i dont know if you would get enough downwards pressure for making an ember.

Apparently you can there are a few vids and it seems easier that a bow drill.

Away from home at pres and unable to watch the vid, but i was reading a hand drill article yesterday where exactly the same was said - seems as long as the spindle turns fast enough then you can still get the dust and heat that you need.

I've probably got very set in my ways with bow-drill... making tiny changes to the kit can make a big difference when you are starting to learn it and they can almost become superstition.  i remember being handed someone else's kit at a demo at an event with a crowd and i'm sure that i visibly blanched before casually squeaking "okay then".