Thought I'd have a go at making a pump drill, see how they work and perhaps do a bit of research on drill bits. Bravo to you sir! Looks great - any reflections so far?

Dunno if you have heard of him, but there was a guy known as Storm, a prominent primitive technologist who passed away a few years back but did heaps of amazing research including the effectiveness of various shapes of burins (and the most exhaustive test of hand or bow drill materials ever, amongst a myriad of other stuff) - he also used quartz crystals in his drills - i'll see if i can find a bookmark in my million or so.

ETA - just checked the drill article and some bits are missing - i remember diagrams of the various different tips and rating for efficacy - possibly on the site liked as "stoneageskills"???

That's an awesome link you have put up Skalla, he's done some amazing tests. The quartz drills he makes seem very effective. The table you're referring to is in random paleolithic ponderings 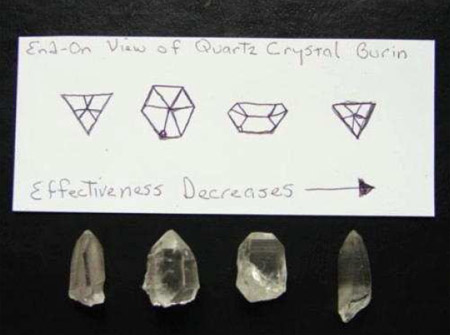 that is a great link - just been reading the hand drill papers, very interesting even though I have never come across most of the woods.

that setup Mr G is well smart - well done, it would be interesting to see it working on a sandstone pebble. wood can he hard to drill.

Funnily enough I got a sandstone pebble today and broke it in half ready to drill. I was planning of several experiments, green wood, seasoned wood, different stones. and maybe bone as well.
- - - - - -
I am fond of pigs. Dogs look up to us. cats look down on us but pigs treat us as equals.

Cool, have a cavey week-end!  it will be interesting to see how the flint does on bone - while twisting a carbon steel knife point in seasoned bone for making eyes in needles i've actually ended up properly blunting the thing